I love introducing libraries of books in my campaigns. It’s the sort of treasure I’d love to find if I were an adventurer, after all. Cracking open a door no one has opened in centuries, only to discover shelf upon shelf of dusty manuscripts…oh yeah, you can keep your gold and gems (okay, maybe not all the gold and gems).

The problem with dropping large numbers of books into your campaign is keeping them interesting. Sure, you’ll come up with cool descriptions for the special books, magical tomes or the books which advance the plot. But in a big library a lot of those books are going to look exactly the same, at least on the outside. That’s where marginalia can spice things up for you. 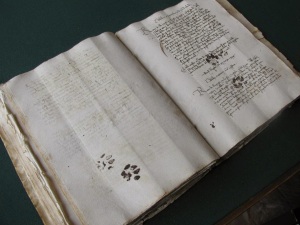 Turns out, cats have been jerks to books for centuries.

The term “marginalia” simply refers to anything added to the margins of a book or manuscript. The earliest examples of this were the scholia, or notes, written in the margins of ancient manuscripts by Medieval and Renaissance scholars. Such scholia continue to this day, the most famous modern example being Fermat’s Last Theorem. But it also includes drawings found in the margins of illuminated manuscripts, as well as (less accurately) notes found among the lines of a manuscript’s text. The term can also refer to anything that one might consider a mistake in the manuscript, thought that usage is less common. My favourite example of this is pictured to the left, where we see that cats haven’t changed one bit.

You might ask yourself why someone would hold onto, or even buy a book that came with errors or marginalia. Unlike today where the cost of printing a book is relatively cheap, any form of the printed word was a time-intensive, and therefore costly, enterprise. If you were half-way through copying out a book by hand and the cat walked across the page with inky paws, or you noticed you made a spelling or grammatical error, you fixed it as best you could and soldiered on. Besides time, the materials used for copying manuscripts were often expensive. Even a simple book copied out in a single colour of ink was still an investment.

Often the marginalia was done quite on purpose. As already noted, scholia were written in by scholars as notations for other students of that particular text.  But artistic illumination was often added to the margins to make the book more impressive, and didn’t always relate to the subject matter. It was not uncommon to find cartoonish and sometimes even vulgar images drawn in the margins, and at the top and bottom of pages. Occasionally these would tell a simple tale over

Hmmm…how do I tell these penises are ripe?

several pages, similar to our relatively modern flip-books. And just sometimes, the artist wanted to draw fruit being picked from a penis tree.

Marginalia in your trove of campaign books can have a wide range of forms and uses. Intentional or in error, marginalia can be used to tease your players with riddles or clues, or waste their time with a literary red-herring. But they’re the perfect addition to any of your campaign manuscripts, instantly making your books more interesting. I’ve provided a list of twenty examples below. You can either pick one you like or roll randomly when a character thumbs through that book they just found.

What sort of oddities have you put in your books? Share below!