Sorry for the catch-up post, but a long-weekend of rest was too much to resist. Of course that just gave me time to think about gaming, so let’s knock these questions out so I can get back to it.

Which RPG cover best captures the spirit of the game? 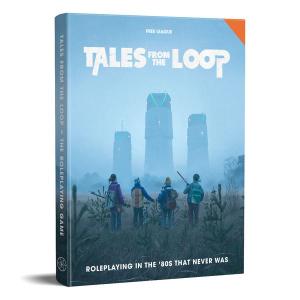 So brand new that I haven’t even had a chance to really dig into it, Tales from the Loop from Modiphius Entertainment has cover art which perfectly captures the feel of the game. The setting is billed as “Roleplaying in the ’80s that never was”, and as someone who grew up at that time, oh how I wish it was! The interior art continues in the same vein as the cover, and evokes the feeling of being a kid at that time, when things were sort of weird and wonderful, and adults just didn’t get it. I have never looked forward to running a game for my friends more in my life, not the least because I get to pour over this gorgeous rulebook. If you’ve been looking to add some Stranger Things or Welcome to Nightvale to your tabletop, this game is for you.

You can game every day for a week. Describe what you’d do!

(I’m going to take this as a Friday to Friday situation, because we’ll need the weekend to rest after.)

So, welcome to HouseCon™! It’s a role-playing convention, in my house! First, I reach out to my regular gaming groups, and I make sure to schedule each of them for at least one day of HouseCon™. Not saying we’ll play all day, but I would be remiss if I didn’t get them on the schedule first. Then I build things around them.

HouseCon™ comes but once a year, so I want to play all the “someday” games I keep talking about with my friends. That cool idea we had for a FATE one-off? Scheduled! A Fiasco survivor series, where we play through 4-6 Fiasco settings, then bring all the survivors together in a winner-takes-all final Fiasco scenario? Super scheduled! Everything is Dolphins? Scheduled, with a side of schedule sauce! A Tales from the Loop one-off, where we each play our best RPG version of our 12-year-old selves? Scheduled to the max, dude!

Also, I would schedule a daily Microscope game on the first six days, to develop a game world. On the seventh day we pick a rules system and we play in that setting, as sort of the closing ceremonies of HouseCon™.

HouseCon™ is not outside the realm of possibility. I don’t think I could manage a week-long version, but certainly a weekend once a year is not out of the question. It’s been on my “to do when the time is right” list for a while, so we’ll see.

What was your most impactful RPG session?

The first thing that springs to mind is not one session, but a number of sessions I ran while I was working/volunteering with the Boys & Girls Club in my old home town. Most of the time when kids dropped by after school, we’d get them up and playing some sort of sport, like basketball or floor hockey. But there were always a handful who really weren’t into that, and so they’d be off on the side reading or doing homework. And that’s cool, but I figured we should try to offer something special for them to try out. So I got permission to run D&D for them. It ran for about 5-6 months, three days a week after school, 2-3 hour sessions.

And it was a blast! One of the great joys of GMing for me is introducing folks to the game, because new players aren’t weighed down with expectations about how things are supposed to work. New players, once you convince them it’s okay, want to do all the exciting stuff they’ve read in books or seen in movies. And as the GM, you get to let them! Watching these kids get excited about the game, and then also start to learn from it, to see them drawing on their experience in the game and applying it to their lives…that feeling is rare and indescribable. If you have the opportunity I highly recommend it.

That’s all, see you tomorrow!