Work has been a bear, and a few things came up besides, so I’m a little behind on my D&December posts. So today is a little bit of catch up, with another catch up post tomorrow to get me up to date.

Day #5: A Moment of Triumph

This might be slightly different than what was intended for the question, but one of the moments I had around characters was the day I outgrew the “lone wolf” style of character. As a young gamer and a lover of fantasy and sci-fi film, the stoic character who makes his own path was well-known to me. And on the screen it looks like an exciting character to play. The problem, of course, is that D&D is a group activity. If you’re playing a loner (or as was often the case, everyone in the group is trying to play a loner) you don’t really fit with the dynamic needed for a successful adventuring party. So the day I figured out how annoying and boring the lone wolf character is for the other players and the GM, was the day I really started to grow as a player and GM.

Day #6: A Moment of Despair

About two years ago, I almost gave up the hobby for good. I was having health issues, both medical and mental. There were health issues elsewhere in my family that were a drain on my time and energy as well. My work was suffering as a result of all this, and I wasn’t sure if I was going to be able to fix that. Tabletop gaming, which had been my escape from all of this, was becoming harder and harder to organize, and I couldn’t work up enthusiasm for it anymore.

It was around this time that I discovered the show Critical Role, and got hooked on watching the adventures of Vox Machina. It didn’t happen all at once, but over multiple episodes I felt my enthusiasm for gaming return. I was reminded of what was truly important about the hobby: shared experience and friendship. It wasn’t a magic bullet, and I still had a bunch of other things to fix. But I was saved from giving up on the hobby which gave me support and strength through the bad times.

I have a longer piece planned for this, so stay tuned. I’ll post it out of order later on.

I talked about them in another post, but I’m really fond of slipping mimics into my campaigns. I enjoy the idea of the “classic” mimic, disguised as a treasure chest to gorge on the greedy adventurer. But I also love the idea that, like other ambush predators, mimics will use whatever works best for their current environment. So a mimic could potentially show up as any inanimate object that might attract prey. And the strength of the creature can be pretty easily adjusted for any party, so they are a wonderful “evergreen” monster to throw at your party at whatever level.

I don’t think dragons get used nearly as often as they should, as an encounter, NPC, or main villain. You have a creature which, barring mishap, will live for centuries and likely has done prior to meeting the adventurers. They are stronger, faster, more cunning, and generally smarter than the party. They can prepare their lair to “properly” receive visitors, and have usually hired or bullied a screen of lesser beings to wear down the party. My favourite way to reveal a dragon in a campaign is to have the characters interact with an NPC who they think is humanoid  for a while, and eventually learn that that NPC is actually a dragon in disguise. Always fun!

See you tomorrow, as I get myself up to day twelve.

I feel like I may have answered this yesterday with Strahd as my NPC, but since it would be boring to just write, “See yesterday’s answer” I’ll pick another.

Instead of a specific character, I’m going to go with type of villain. And my favourite villain type is the true villain. I can have fun with a “shades of grey” villain, who is maybe a little sympathetic or actually has good reasons for their actions but goes about them in the wrong way. But sometimes I want to just let slip the dogs of evil and confront the party with a hold nothing back, scenery chewing, evil to the core villain. The kind of villain who actively chooses to do the selfish, nasty thing all the time. And maybe they play on the “I’m just misunderstood” trope to confuse the characters or string them along. But they are dastardly and evil through and through. And the only thing they love more than crushing the innocent is crushing the party of adventurers who dare defy them.

My first post is up over at The Rat Hole, and it would be swell if you went and checked it out. It’s sort of a mission statement for the next several weeks of posts, and I’m excited to research and write those articles. Plus you can check out the news and reviews posted by Dave; this month is all about Christmas themed games so you should check that out. 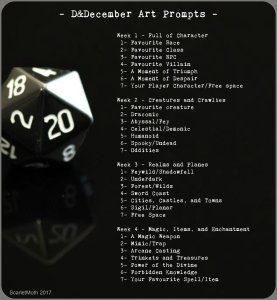 Between work and getting into the swing of things with my seasonal depression, I’ve been away for a bit. That’s all about to change, as I’m taking part in the D&December Art Prompts (seen left) and I’ll be posting every day this month. As is tradition I discovered this just after the beginning of December, so today is catching up.

But first a few pieces of Renaissance Gamer news. First up, if you just can’t get enough of me here, I’m a new weekly contributor over at The Rat Hole, a gaming news and reviews site newly minted by my buddy Dave Chapman. He’s been at the game reviewing biz for a while, and I am shamelessly riding his coat-tails as he begins this new venture. I’ll be posting an article every Monday on topics relating to the role-playing game hobby, starting with a series on getting into the hobby. And even if you’re a RPG veteran, these articles will discuss ways to make our space welcoming to new gamers. And you should go there anyway to read Dave’s reviews and news, because he’s got some good things to say.

Second piece of news: in January I’ll be hosting the RPG Blog Carnival. Started by Johnn Four over

at Roleplaying Tips, the carnival invites one blogger to host each month and provide a topic. Other bloggers then post their own takes on that topic, and comment back on the host site so the links are all in one place. It’s a great way to get myriad perspectives on a subject, as well as being highly entertaining. My January topic, fitting after the holidays have lightened our collective wallets, will be “Roleplaying Games on a Budget”. I know a few things I plan to write and I can’t wait to see what other folks come up with.

But now the main event: D&December!

My favourite race to play in D&D is a plain old vanilla human. I know, I know, all those wonderful races to choose from, I go with the “round ears”. I’ve played other races and enjoyed them. But if I’m going to settle into a character I plan to play a while, I’ll go with human every time. Versatility is certainly one of the reasons, but it isn’t the main one for me. As a player, I want the DM to reveal a world of wonders and terrors, and I want the feeling of exploring that world and discovering those wonders and surviving those terrors. And so I will tend to pick a character which is, well, me. Playing human lets me focus on that experience without also having to juggle the lense of another race. I’m happy to explore that in other games, but for D&D human is how I roll.

I’ve long been a fan of the wizard class, and that hasn’t gone away in D&D 5e. I like the way the school specializations have been handled, and I don’t think there is a “weak” school to choose from, depending on the campaign. My ideal build for my wizard is the “adventuring scholar”; always on the lookout for new spells, spellbooks, scrolls, and other magical gewgaws to enhance his art. The strength of the wizard, for me, comes from the sheer number of spells he can know, and the fact that he can store more situationally useful spells on scrolls while memorizing the more broadly useful ones. For instance, you may not need knock every session, but having it on a scroll gives you an option for when the rogue is all thumbs that day. And once the wizard can lay hands on a Handy Haversack, his scroll game become fierce.

I wasn’t sure if this meant my favourite type of NPC, or a specific NPC from Dungeons & Dragons. So I’ll touch on both.

My favourite type of NPC is what I call the “web spinner”. This is an NPC which the players, through no fault of their own and possibly without realizing, end up opposing. They work behind a sometimes shifting screen of lieutenants and flunkies, maybe even working as the power behind a fairly Big Baddie to further hide their efforts. I love using them, because done well the big reveal when the party realizes who or what they’ve actually been opposing all along is delicious. Especially if they’ve been interacting with that NPC the entire campaign.

My favourite specific NPC in D&D is Strahd, which should come as no surprise (see above). Strahd is the master manipulator, working behind the scenes to choreograph a monstrous dance, delighting in watching the player struggle to learn the steps. And not because he’s afraid to confront the characters, but because the eventual confrontation will be all the more delightful when they realize to whose tune they’ve been dancing.